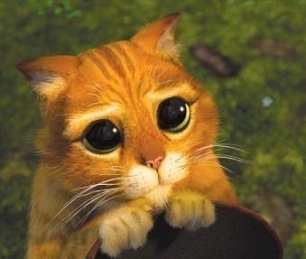 Not limited to actual puppies.

Be they cute little girls, or perverted old men, if they want to play on your sympathy, they'll turn eyes huge and shining with unshed tears upon you.

Generally, the younger the character doing it is, the more effective.

Often a forerunner to Ocular Gushers. Tareme Eyes enhances the effect. Surprisingly, plays very well with a Cat Smile. Compare with Quivering Eyes, with which it can combine for devastating effect. Occasionally, the "victim" will respond with something along the lines of "Don't try that trick on me, I invented that trick".

Examples of Puppy Dog Eyes include:

She did the tests.

Retrieved from "https://allthetropes.org/w/index.php?title=Puppy_Dog_Eyes&oldid=1946842"
Categories:
Cookies help us deliver our services. By using our services, you agree to our use of cookies.