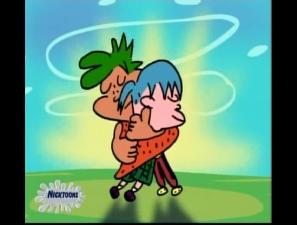 Awwww! And they aren't even in high school and probably never hit puberty (except their voices getting lower)! Aren't they cute?

We played Nintendo!
This was her very first date
I didn't wanna make it seem too fly.
We ate cereal!
She couldn't stay out at late
Her mother told her to be home at nine!

Awww! Don't they make a cute couple? C'mon! You know they were totally made for each other!

What do you mean they're both only eight years old?

Sometimes it happens that two characters display a startling amount of chemistry, even though they're both barely old enough to be interested in the opposite sex—heck, they might even still be in the "Boys/girls have cooties!" stage. (Which may help explain their proness to the Crush Blush; it's embarrassing!) It may be attempted by the authors if the show deals with characters of that age group, but still wants to add in a romantic subplot. Because the couple hasn't reached puberty yet, there's no sexual component to the romance. Expect nothing more than hand holding and maybe a chaste kiss.

This trope is Older Than Television. It can also be Truth in Television as many people get their first Precocious Crush sometime during Elementary School.

Please note that this does not automatically qualify as Squick since most examples involve innocent childhood crushes between the two. Most writers let these characters age a bit before making moves. Some... don't.

Sometimes this is referenced as happening in the past, when (usually the woman) says she started chasing the man back when they were six (or eight or whatever), and "it took me [X] years to catch him -- but it was worth it." Often a result of a Victorious Childhood Friend. Can be quite sad if she's trying to encourage an Unlucky Childhood Friend. See also Childhood Marriage Promise and Kidanova. Opposite of December–December Romance.

Compare/Contrast: Lolicon and Shotacon. May be due to a Relationship Writing Fumble or the fact that Most Writers Are Adults. See also Father, I Want to Marry My Brother.

Examples of Puppy Love include:

Wednesday: Joel, I may never see you again. There are forces tearing us apart - Gary, Debbie, 7th grade.

Daniel: Aren't you a bit too young to be in love?
Sam: No?

They came home, but not too late
For Anne Marie was seven, Jean Pierre was eight.