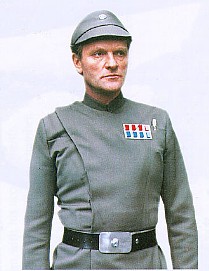 Gray uniforms with button panels, the fashion of choice for today's Mook on the go.

A quick and easy way to suggest a group of people are evil in fiction is to give them uniforms that resemble those worn by the Third Reich, the Roman Empire, pseudo-Mongols or the Soviet Union. In a broader sense, this can also refer to using other stylistic elements from the Nazi times (like the "Führer" title, goose-stepping "stormtroopers", or swastikas if the creator is more daring) to make sure your villains are visibly evil.

Incidentally, some of the uniforms for the real SS were manufactured by Hugo Boss (father of the famous one) using slave labor. Those Wacky Nazis were actually pretty snappy dressers despite being evil, which just furnishes another reason for authors and costume designers to borrow their motifs. Very common when State Sec is around.

This trope is named after the expression "Puttin' on the Ritz".

See also A Nazi by Any Other Name. May result in Commie Nazis.

Examples of Putting on the Reich include:

Retrieved from "https://allthetropes.org/w/index.php?title=Putting_on_the_Reich&oldid=1945944"
Categories:
Cookies help us deliver our services. By using our services, you agree to our use of cookies.