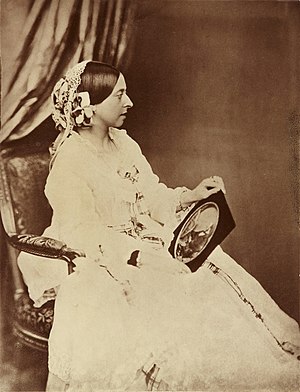 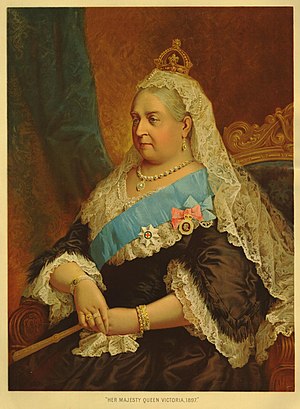 Queen Victoria (1819-1901) reigned over the largest empire the world has ever seen. She was a hugely important figure, causing sweeping changes in the history of many parts of the world, and inspiring her people. She was not simply a prudish old woman with no sense of humour, and in fact probably never said, "We are not amused".

Her reign was equally momentous, occupying nearly the entire period of the Industrial Revolution, from 1837 to 1901 (the longest in British history until 2015, when Elizabeth II surpassed her great-great-grandmother's reign).

She married her cousin Francis Albert Augustus Charles Emmanuel in 1840, leading prank phone callers to ask if their victim had Prince Albert in a can. Albert died of typhoid fever in 1861, still young(ish) and handsome, leaving Victoria stricken with grief. She never remarried.

Many, many books have been written about her and her era. These tend to be set when they were written, either in Victorian London or in the colonies. Also the default timeframe for Steampunk works.

Retrieved from "https://allthetropes.org/w/index.php?title=Queen_Victoria&oldid=1970225"
Categories:
Cookies help us deliver our services. By using our services, you agree to our use of cookies.