Everything About Fiction You Never Wanted to Know.
(Redirected from Quincy ME)
Jump to navigation Jump to search 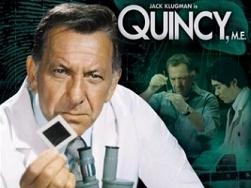 A popular late '70s-early '80s Forensic Drama about the eponymous Quincy, ME (Jack Klugman) and his work handling cases in an LA coroner's office.

The show began as an entry on The NBC Mystery Movie before being shifted into a full-fledged series in its own right, and enjoyed a lengthy run (1976-1983). The basic formula had Quincy working on a corpse whose death had been ruled an accident or suicide. In each episode he would find something strange in the autopsy which would lead him to suspect murder. Quincy would then start sleuthing, inevitably picking up on clues the police missed. He'd eventually find enough evidence to force the always-clueless cops to re-classify the death as a homicide, at which point Quincy would expose the identity of the killer.

During his time solving suspicious suicides and uncovering evildoers, Quincy was assisted by loyal Lab Rat Sam Fujiyama (Robert Ito) and was constantly at odds with both Lt. Monahan (Gary Walberg), who resented Quincy's meddling, and Dr. Asten (John S. Ragin), who resented all the overtime hours Quincy and Sam racked up.

Tropes used in Quincy include:
Retrieved from "https://allthetropes.org/w/index.php?title=Quincy&oldid=1436319"
Categories:
Cookies help us deliver our services. By using our services, you agree to our use of cookies.