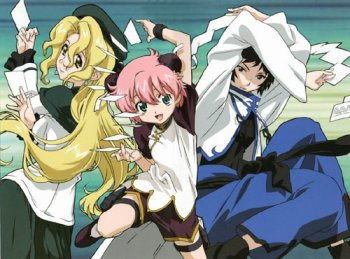 "Read or Dream" redirects here. However, that is a separate work that deserves its own page.

R.O.D the TV is the sequel to the Read or Die OVA. This 26-episode series focuses on the Paper Sisters Maggie, Michelle and Anita, three young women who have paper-manipulation abilities. Although older sisters Maggie and Michelle are fanatical bibliophiles, Shorttank Anita paradoxically hates books. The three work together as detectives and independent agents in Hong Kong until the day Nenene Sumiregawa, an author who Maggie and Michelle are fans of, comes to the island for a book signing. The three are hired as her chaperones and drivers, but become her bodyguards as well when her life is threatened. After Nenene returns to Japan she enlists their help in looking for her missing friend Yomiko.

The rather strange title of the show refers to its fusion of the Read or Die OVA and the cast from Read or Dream, a manga centered around three sisters with powers similar to Yomiko's. Adding to the confusion were both animated adaptations being somewhat different in tone from their respective manga. Regardless its proved to be an interesting blend of both series that worked out particularly well.

The Read or Dream manga (which the Paper Sisters come from) is available in the States for the curious.

Shares a character sheet with Read or Die.

Tropes used in R.O.D the TV include:

"It has a be a bug in the system. Only .9% of the population possible has enough of a sense of identity to resist the Brainwashing."

"Follow the reality of the British Library or be destroyed. Dream... or Die."