Everything About Fiction You Never Wanted to Know.
< RWBY‎ | Recap‎ | Trailers
Jump to navigation Jump to search 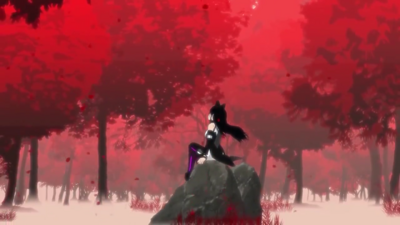 The scene opens on a forest of brilliantly scarlet foliage. In the center of the scene, a girl in white and black (and purple, though it's hard to see) sits contemplatively on a large bouder. A figure in black -- Adam, we learn later in the trailer -- walks up to her and says, "Blake, it's time."

She turns to him slowly and says, "Okay."

A moment later we see them speeding through the red forest to halt at the top of a cliff. Below them is a wide railroad track, and in the distance an oncoming train. They slide down the hill and then leap off to land on the roof of one of the train's freight cars. Climbing inside through a hatch, they find themselves surrounded by robot guards, and when challenged, attack.

After demolishing all opposition in the car and across the next, a flatcar this time, they make their way into another freight car, where they find and check the contents of a chest. "Perfect," Adam says. "I'll set the charges."

"What about the crew members?" Blake asks with obvious concern.

"What about them?" he all but sneers in response.

Before she can reply to that, a huge spider-droid drops out of the shadows above them. Unlike its predessors, this defender is no pushover; its armor is resistant to both Blake's blades and her bullets, and with one powerful salvo sends them flying out of the freight car and onto the next flatcar. At Adam's request, Blake distracts the spider-droid while he prepares his next attack. The droid fires its big gun again, and Adam catches the beam on his sword, apparently absorbing the energy. Glowing with power, Adam slashes with his blade, disintegrating the droid and much of the cargo on the flatcar.

When he turns back, he finds that Blake is standing on the next flatcar, right above the coupling. As if anticipating what will happen next, he raises his hand as if to stop her, but she says simply "Good-bye", and cuts the coupling. As the detached cars slow and she recedes into the distance, she turns into a black silhouette on a red background.