Everything About Fiction You Never Wanted to Know.
(Redirected from Racing Game)
Jump to navigation Jump to search 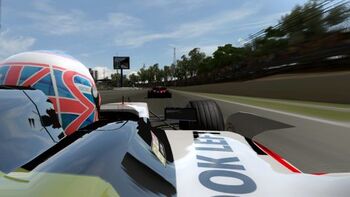 A subcategory of Sports Games. You are on a course or given a course to take and your goal is to get from point A to point B as fast as you can, usually before your opponents do. Sometimes you're just the car, and you never even see the driver, sometimes you drive nothing at all.

Most racing games are Driving Games and all sit somewhere on a line between "arcade" and "simulation". Toward the arcade end Every Car Is Rear Wheel Drive and brakes are nearly unnecessary; toward the simulation end, games like Gran Turismo and Forza Motorsport, where brakes are the only thing saving you from skidding head-on into the wall and cars are as close as can be made to their Real Life analogues. The most popular racing games are the ones that blend arcade style with real-life cars and locations, or ones that feature an already-popular franchise. Stricter driving sims are more the preserve of the PC market, where there are large online racing and modding groups.

Simulation-style racing games are generally "no contact" affairs, just as in real life. Most NASCAR and Formula One games involve driving around a track with set rules of noninterference with your competitors. Most arcade racers are "full contact" racing, where you can bump and shove your opponents into barriers or just simply spin them out.

If the game has real cars in it, the names and likenesses are licensed from the manufacturer(s). Generally, the terms of the license require that the cars be invulnerable, as auto manufacturers don't want people to think their cars get damaged easily. This just happens to promote the idea that dangerous driving has no consequences, but hey, at least our car looks good.

Of course, the car drivers themselves are even less vulnerable and you rarely see them die in a car crash. Even in games where you are not driving cars, they usually still fall neatly into arcade or sim, though the further they go towards simulation in this case, the less they will play like a driving game.

The following 78 pages are in this category, out of 78 total.