Rage Against the Reflection 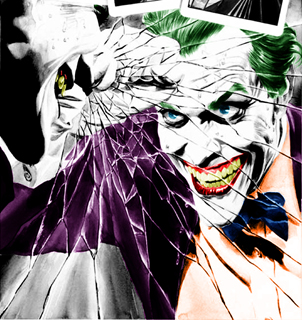 The perfect end to The Joker's one bad day.

A character, deeply unsatisfied with their current state of being, looks in a mirror or a pool of water. After a while, the character will either say (or sing, in a musical) something about themselves or just become angry, and disrupt the reflection in some way to show their dissatisfaction. This can involve punching or throwing something at a mirror in order to shatter it, slapping or stirring water to distort the reflection, or otherwise make the image of themselves go away. For some added Angst, the puncher could injure their hand in the process.

Can occur with characters who have been transformed or feel like they're being forced to become something they're not. If it's the transformed variant, sometimes the reflection will show their original form instead of their current form. Also sometimes used by characters who are either ugly and suffering because of it, or made a decision that they regret and are angry at themselves about it. Contrast Distracted by My Own Sexy where characters like looking at themselves, and for an extreme case see House of Broken Mirrors.

Examples of Rage Against the Reflection include: