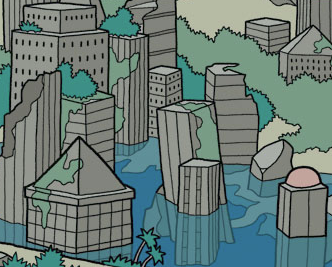 We've gone from bashing our information into rock, where it will last a billion years, to putting the sum-total of the knowledge of the universe on - a chip you can destroy with a fridge magnet.

It is, understandably, common in post-apocalyptic fiction to show the ruins of society. However, many are set several decades, or even centuries or millennia After the End, and the remains of the pre-cataclysm society are in remarkable condition. Buildings and objects will never fall apart due to neglect, and any pre-cataclysm devices or vehicles that the characters find will work just fine.

In reality, time isn't so kind to abandoned modern technology. All but the simplest electronics will fail after decades of being unused. Electrolytic capacitors dry out (or succumb to the capacitor plague), batteries self-discharge and leak, flash memory very slowly fades away, and the chassis and contacts rust and corrode. Hard discs rot or degrade over the same time frame, and the skin of optical media such as Blu-Rays and DVDs corrodes, rendering the disc illegible (aka "CD rot").

Large scale structures fare no better. In many climates, wooden frame buildings will last about 50 years before falling apart thanks to termites and rotting. Metal, no matter how well protected, will eventually succumb to the elements. After about 75 years, cars will turn into almost unrecognizable piles of rust. Large bridges will collapse after only a century, and most skyscrapers will collapse around the 200-300 year mark. After 500 years, nearly all concrete structures still standing will crumble as their steel reinforcements corrode. See The History Channel's Life After People for more information. And this is all assuming that a natural disaster like a tornado, earthquake, or hurricane doesn't destroy it all first. (How much of Florida would survive 10 years if people weren't around to board everything up each summer?) It also ignores the likelihood that whatever arises after the fall of society would knock it down/scavenge it themselves instead of just waiting for nature to do the job.

After a thousand years, the Earth will look much like it was before humans, and few obvious traces of civilization will be left. Some plastic types, if buried underground (away from UV radiation) will keep for a long time until something figures out how to properly eat them; anything made out of bronze is expected to last for millions of years (so cast your memoirs with it); major cities, being massive conglomeration of artificial rock on the scale of a coral reef or lava flow, will leave traces in the geological record discernible for several hundred million years; depleted uranium will remain detectably depleted for billions of years; -- but none of this will be visible to a casual observer, or even a medieval society, and little of it will be immediately recognizable to future visitors.

If only one thing inexplicably survives, such as in a Time Travel or Earth All Along setting, it's known as The Constant.

This trope can be justified, in small doses, since there is an expensive way to render any metal rust-proof the same way that platinum is—one could assume that these relics have survived because of a similar process and the chemicals used in it are breaking down, allowing the relics to decay in places where the treatment faded first. This trope is also justified when dealing with advanced alien technology, as such technology may not necessarily decay as the same rate as modern Earth technology.

Societies with Ragnarok Proofing will allow a Scavenger World to exist, using Schizo-Tech from many different time periods. Precursors frequently build like this—though usually the main effect is limited to the collective awe of upstart civilizations stumbling on their artifacts long after they became extinct or moved on.

The History Channel produced a television special documentary film and TV series Life After People where scientists and other experts speculate about how the Earth might be like if, suddenly, humanity no longer existed.

The term Ragnarok originates from Norse Mythology where it means 'Destiny of the Gods'; although in modern consciousness it's better known as 'Twilight of the Gods' and associated with The End of the World as We Know It, largely due to some German composer by the name of Richard Wagner.

A subtrope of Sci-Fi Writers Have No Sense of Scale, Older Is Better and/or They Don't Make Them Like They Used To. See also Durable Deathtrap, Apocalypse Not, In Working Order, and Never Recycle a Building. See Indestructible Edible for the food version.

Examples of Ragnarok Proofing include:

Yui: Humans can only exist on this Earth but the Evangelion will be able to exist forever, along with the human soul that dwells within it. When the Earth, the Moon and the Sun are all gone, Eva will exist so long as just one person remains. It will be lonely but as long as one person still lives-
Fuyutsuki: It will be eternal proof that mankind ever existed.

Sylveste: It's my suspicion -- no; not a suspicion, my conclusion -- that the [900,000-year-gone] Amarantin eventually progressed to the point where they could achieve space travel.
Sajaki: From what I gathered on the surface there's very little in the fossil record to substantiate that.
Sylveste: But there wouldn't be, would there? Technological artefacts are inherently less durable than more primitive items. Pottery endures. Microcircuits crumble to dust.

Any fool could see there was something unnatural about the structure; the winds and suns of three thousand years had lashed it, yet its gold and ivory rose bright and glistening as the day it was reared by nameless hands on the bank of the nameless river.

Tycho: It's likely a quick and dirty patch into the durable S'pht hardware. These types of strongholds were build to outlast centuries of warfare.
Pfhor computer terminal: The quality of the machinery is quite extraordinary, and most of the computer terminals are still functional even after two thousand years.

Petey: Because "needs no maintenance" is a lie. When entropy finally exposes the lie, nobody knows HOW to do maintenance. Then everybody dies, and entropy wins again.

Vore: What Year Is This? How long was I in there?
Vanderbeam: By our estimation, 1420 years.
Vore: Man! The Japanese build things to last!