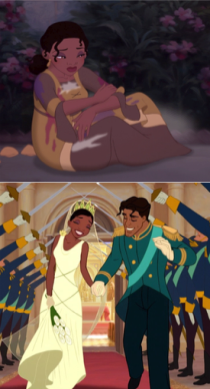 In her case, everyone glosses over the frog phase.

A classic of Literature, this Changeling Fantasy is as simple as it is sublime: the beautiful, hard working, put upon commoner girl who never loses her hope will be a princess or queen by stories end. That much is certain, what varies is how she goes from Rags to Royalty.

This is Older Than Feudalism, and has long since gone into being a Dead Horse Trope when used in a serious application. However, sweeten the deal with a deconstruction or other device, and this will work quite well in a modern setting.

Epidemic in the Fairy Tale, it often reappears in retellings of fairy tales. This is a common reason why kings who have promised the Standard Hero Reward decide instead to assign another Engagement Challenge, and then another. And another. . . (This is usually very unwise in the long run.)

Christopher Booker takes the Cinderella version for his second plot, Rags to Riches. According to his scheme, the hero seems to get everything he wants very early, only to lose it through a serious character flaw, which leads to the darkest moment for the hero (e.g., in the original Aladdin, when the villain had stolen both the lamp and the princess). Then, of course, the hero manages to face his flaws and gets an even better prize than the one he would have been content with early on.

May combine with She Cleans Up Nicely and Lineage Comes From the Father.

Examples of Rags to Royalty include:

Retrieved from "https://allthetropes.org/w/index.php?title=Rags_to_Royalty&oldid=1887024"
Categories:
Cookies help us deliver our services. By using our services, you agree to our use of cookies.