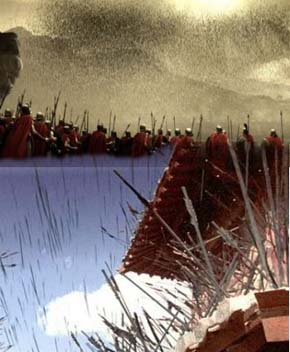 Bows and arrows are cool. Say what you will about Guns and Badasses going together like bread and X-treme butter, but without copious amounts of Bullet Time, you can not see the bullets in flight. Guns are, by and large, an invisible (and noisy) killer. Not so with arrows; a simple twang, a blurred shaft, and bad guys fall down.

Up the scale a bit. You have a firing line of armed mooks; again, you'll see the gun smoke but not the bullets. Being cooler collectively than individually, a group (or a single!) archer can cause a rain of arrows to descend upon their foes like Death From Above. Add in some Arrows on Fire for extra burny goodness. By definition, the Rain of Arrows trope is mutually exclusive with No Arc in Archery.

This is a case of Truth in Television; archers in medieval warfare were used in exactly this way.

Examples of Rain of Arrows include:

In the crossover series, Warriors Orochi, this attack becomes incredibly useful, due to effects that make projectiles stronger, the fact that she can charge the attack to fire more arrows, and a delay between when you fire and when you hit, which you can use to fire other arrow-swarm attacks.

So the Rain of Arrows starts off as a cool motif for the good guys, only to be snatched away and showing off the bad guy's Crowning Moment of Awesome instead.

This was the result of an almost obsessive focus on longbow training in England, to the point that sports like golf were at one point banned to prevent them from taking time away from archery. How obsessive? Arming the English longbowmen exhausted the country's entire usable supply of yew. In the 14th and 15th centuries any European ship arriving in England to trade had to pay a toll in yew bowstaves.
The English at Agincourt had an army that was about five sixths archers. A kind of middle-ages Min-Maxing, with Henry V as royal Munchkin. The French, on the other hand, were the Scrub of the piece, convinced that their rules of chivalric and noble combat were the only proper way of making war. Still, despite the English being rather outnumbered, it ended up something of a Curb Stomp Battle.