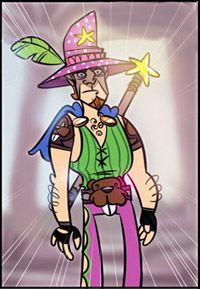 Reminds me of this one group I ran with. The barbarian in our group found, and I quote: "a pink frilly tu-tu of Strength +6", and he wore it with pride for the rest of the campaign.
—KillItWithFire, Giant in the Playground forum

What happens when players equip their characters with gear solely based on stat bonuses without consideration to how it will look on them. The end results tend to be... colorful... to say the least. David Sirlin has an article on this phenomenon, appropriately entitled Football Helmet Clown Shoes Guy.

Many games try to circumvent the phenomenon by letting the equipment to be dyed, or allowing cosmetic alteration of equipment so it would look like another item.

Contrast Virtual Paper Doll, where the items usually look better, even though they are superficial. Also contrast Full Set Bonus, where the items are meant to be used together and this is encouraged by giving a full set bonus.

Examples of Rainbow Pimp Gear include:

His hat in that game... I didn't think he could have one more outrageous than usual. I was wrong. [1]
His outfit... I was watching a Let's Play. I'd heard of Jarlaxle. The LPer hadn't. His reaction to going around the corner to see this would have been worth the ENTIRE LP even if it had sucked. [2]

Haley: ... so the Boots of Speed were totally powerful, but they were, like, lime green.
Vaarsuvius: Indeed. A most grave conundrum you faced.