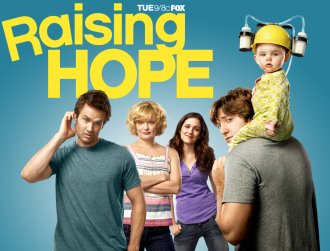 A series by the creator of My Name Is Earl.

Jimmy Chance is a 23-year-old slacker who works for his father Burt grooming lawns and cleaning out pools. His best friend is his cousin Mike. His mother Virginia works as a maid for "Knock Knock Knock...Housekeeping". His great-grandmother Maw Maw is nearly always delirious and sometimes believes he's her old dead husband. And he's desperately searching for his place in the world.

So when he meets a young woman one day, he thinks it's fate that he falls in love. Until that young woman turns out to be a Serial Killer (who kills her boyfriends, natch) and is subsequently arrested and sentenced to the electric chair. Before dying, however, she gives birth to his baby.

Although his mother wants him to leave the baby outside the fire department, Jimmy is determined to raise her by himself. With a little help from his parents (and the cute girl at the grocery store), he's slowly learning how to raise Hope.

Tropes used in Raising Hope include:

Shelley: He broke the bulb.

Sabrina: Nice car seat.
Jimmy: Oh yeah, thanks, it's a used one.
Sabrina: I can see that. Who used it, baby Jesus?

Burt: O Father, thank you for my great hair, which thou hast not takeneth away, and for my excellent jawline, and my rock-hard abs...

Burt: All I'm selling is the dream.

'Bully: I got what I really wanted, what I needed the most... a vagina.

A Little Beaver marches without fear
A Beaver's always in the front and not the rear
When a Beaver's lost and cold she warms up by rubbing sticks
I'll never give up because a Little Beaver can't be licked.

"Because I have no idea what's going on!"

Burt: Remember when you used to wear all that make-up? You looked like a freak!
Jimmy: Shut up! And never ever say anything about that around Sabrina. It's embarrassing.
Burt: Don't worry, I wouldn't wanna mess up your chances.