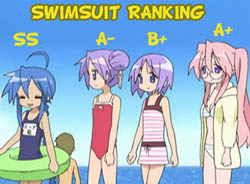 In video games, rather than mark the player on a simple success/failure scheme, it is common to give the player some kind of rank (e.g. bronze, silver and gold medals, or grades A+ to F-), depending on their performance. This allows casual players to coast through and simply get the bare minimum required to pass, while those who want a challenge can aim for the gold medals.

But then what about the players who are really looking for a challenge for whom mere golds aren't enough? The solution—give them platinum medals to aim for. A-grade not good enough for you? Go for A+, or S. Sometimes, even these inflated ranks are subject to inflation, with A being about average and the real goal being a more different S rank: SS or even SSS.

Compare Harder Than Hard, Random Power Ranking, Score Screen, Pinball Scoring, Up to Eleven, Serial Escalation. When it's a reviewer doing this, it's Broke the Rating Scale (Type 1). Contrast with its inverse, F Minus Minus.

Examples of Rank Inflation include:

Retrieved from "https://allthetropes.org/w/index.php?title=Rank_Inflation&oldid=1770154"
Categories:
Cookies help us deliver our services. By using our services, you agree to our use of cookies.