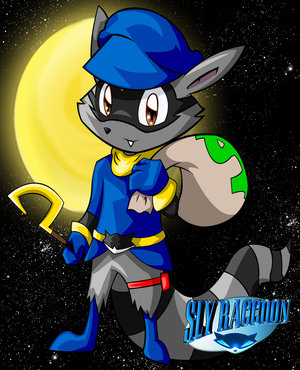 Raccoons' cute masked faces have led to countless fictional depictions as sly, thieving (though usually cute and cuddly) tricksters. Due to Alliteration, most fictional raccoons are usually described as "rascals" (this word was used so often, it even became their Stock Animal Name!). Usually Rascally Raccoons are depicted as just playful, mischievous, maybe a bit disobedient – though portrayal as literal thiefs or kleptomaniacs isn't rare, either.

A subtrope of Animal Stereotypes. Compare Cunning Like a Fox. For the Japanese raccoon dog that tends to get a similar treatment in fiction, see Tanuki.

Examples of Rascally Raccoon include: