Everything About Fiction You Never Wanted to Know.
Jump to navigation Jump to search
/wiki/Rat Packcreator 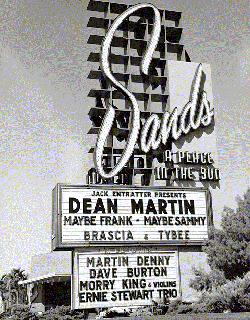 Who's it going to be tonight?

The Rat Pack was a loosely defined group of actors (and a few actresses) that sprang up in the Fifties, centered on Humphrey Bogart. According to long-standing Hollywood legend, Bogie and his buddies (David Niven, Sid Luft, Cary Grant, et al.) came home around dawn after a hard night in Vegas, and Bogart's wife, Lauren Bacall, said, "You look like a goddamn rat pack!" Among those original rats was Frank Sinatra, who took over as pack leader upon Bogie's death in 1957. Shortly, Dean Martin and Sammy Davis Jr. would join, and when Peter Lawford and Joey Bishop came on board, they had themselves a Rat Pack.

(Note that Sinatra hated the name "Rat Pack". He would call the group "The Summit", but that never stuck.)

The Rat Pack were legendary for their Las Vegas performances, which were seldom scheduled in advance. (The photo gives you an idea of how hard it is to publicize such an arrangement.) About the time they hit town to film Ocean's 11 in 1960, they started playing the Copa Room at the Sands, and scoring a ticket was like winning the lottery. Everybody who was anybody showed up, and audience members were frequently incorporated into the act.

Their act (always in black tie) consisted of songs in solo, duet or trio, along with much seemingly improvised slapstick and chatter (which was always carefully scripted, primarily by Bishop). Sinatra's infamous womanizing and Martin's drinking were frequent targets, as were Davis's race and religion. It may seem unlikely today that lines like "Hey Sammy, smile so we can see ya!" could somehow be socially acceptable, but the obvious good nature and sincere mutual respect made it work. Plus, the Rat Pack was largely responsible for the integration of Las Vegas; if Sammy was refused a room, Frank and Dino very publicly refused to perform or even darken the door. It's fair to say that Las Vegas was the first truly integrated city in America, in very large part due to the Rat Pack.

The Rat Pack also campaigned actively for presidential candidate John F. Kennedy, whose sister was married to Lawford (thus Sinatra's nickname for him, "Brother-in-Lawford"). After JFK was elected, Lawford distanced himself from Sinatra due to the latter's supposed Mafia ties; that was a quick ticket out of the Rat Pack for him. By around 1970, the Rat Pack was unofficially disbanded.

In 1987, Dino's son Dean Paul was killed in a plane crash, and Dino took it hard. Frank thought that getting the group back together and going out on the road was just what Dino needed (and Sammy too, who was in dire financial straits). The "Together Again Tour" was announced to great fanfare, but Dino only made it a week then packed it in. Thus was the ignominous end of the Rat Pack.

The Rat Pack lives on in a funny way: Any time a group of actors, singers or other celebrities gain fame or notoriety together, they're called "The [word that rhymes with rat] Pack"; viz., Brat Pack, Frat Pack, Eli Roth's "Splat Pack", etc. etc.

If you're feeling nostalgic while in Vegas, go to the Grand Canal Shoppes in the Venetian resort, and stand in what they call the "Oculus", between Kids Karnivale and Marshall Rousso. You are standing right where the stage was in the Copa Room.