Everything About Fiction You Never Wanted to Know.
Jump to navigation Jump to search
/wiki/Ray Bradburycreator 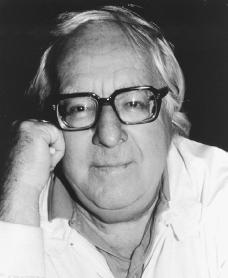 Ray Bradbury (1920-2012) was an author of Speculative Fiction, Mystery, and Horror. He was also known for his screenplays, poetry, and organizing large anthologies in the Science Fiction genre.

His most well known novel is probably the dystopian novel Fahrenheit 451. His most well known short story is probably "A Sound of Thunder", which gave the world the Butterfly of Doom. Other Bradbury works with pages on this wiki include the short story "There Will Come Soft Rains", the dark fantasy novel Something Wicked This Way Comes and the film It Came from Outer Space.

Several of his novels and short stories have been adapted to film and TV series. Back in the 1950s, he discovered that two of his stories had been adapted by EC Comics without permission. He kept his sense of humor about this, writing a note to the publisher praising the adaptations, while remarking that he had "inadvertently" not yet received the royalties. The publisher was eventually able to print several fine authorized adaptations of his work.

Works by Ray Bradbury with their own trope pages include

Ray Bradbury provides examples of the following tropes:
Retrieved from "https://allthetropes.org/w/index.php?title=Ray_Bradbury&oldid=1900860"
Categories:
Cookies help us deliver our services. By using our services, you agree to our use of cookies.