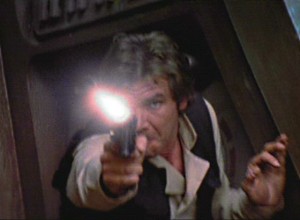 "Hokey religions and ancient weapons are no match for a good blaster at your side."

Any gun that shoots light, rays, waves, or something similar. Initially popular during the appropriately named Raygun Gothic era of Science Fiction, but back then it was based on pure Phlebotinum, as shooting such things from weapons wasn't known to be possible. In short, the ray gun was falling out of favor for being unrealistic. Then the laser was discovered in The Sixties. Suddenly the Ray Gun was brought back from being a Discredited Trope.

But even now it's still treated as an Impossibly Cool Weapon, as lasers in fiction are often used in ways they can't really be. And while other ray guns do exist in Real Life (the US Army has been experimenting with microwave crowd dispersal wave generators, for example), they're still Cool but Inefficient.

The term "ray gun" became a cliché even by the 1940s, having strong associations with Buck Rogers, Flash Gordon etc., and from at least E. E. "Doc" Smith's Lensman novels, was increasingly replaced by the more bad-ass-sounding generic "blaster", Smith himself generally choosing to refer to the weapons by their maker just as we would refer to a Colt or Smith & Wesson.

They are also popular as a form of Family-Friendly Firearms.

A Sub-Trope of Energy Weapon. Not to be confused with ReiGun, Railgun, the president, or Rei with a gun.

Examples of Ray Gun include:

Retrieved from "https://allthetropes.org/w/index.php?title=Ray_Gun&oldid=1641148"
Categories:
Cookies help us deliver our services. By using our services, you agree to our use of cookies.