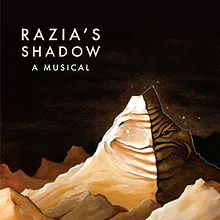 "The unrelenting constancy of love and hope will rescue and restore you from any scope."
—The End and the Beginning

Razia’s Shadow is a musical written by Forgive Durden. Released in 2008, it contains not only the lead singer of the band, Thomas Dutton, but the vocal talents of such artists as Brendon Urie of Panic! at the Disco, Greta Salpeter of The Hush Sound, and Lizzie Huffman of Man in the Blue Van, to name a few.

There are two acts in the album, separated by a short intermission. The story begins with the creation of the world by O the Scientist and the betrayal of his most talented cherub that plunges half of the land into eternal night. A century later, we meet Adakias, the prince of the dark, who wants nothing more than to leave his arid home and venture into the light.

Genesis
The Missing Piece
Life is Looking Up
The Spider and the Lamps
Toba the Tura
The Oracle
A Hundred-Year, Minute-Long Intermission
The Exit
It’s True Love
Meet the King
Holy the Sea
Doctor, Doctor
The End and the Beginning

Tropes used in Razia's Shadow include:

She requires riches, recherche, riding with rodomontading roues
Casanovas have charmed with chiffons, so chichi.
Chased her with their conceited coteries
She's been propositioned, propounded, by every pompous prince,
Given panniers of Peleus pears and plums polished
I've been seduced with shimmering, sparkling, stones,
Squired by suitors to sizable chateaus