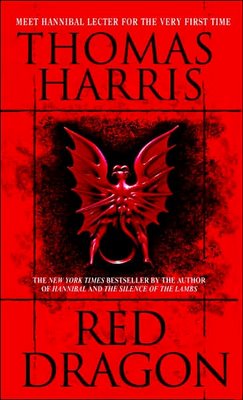 In 1981 Thomas Harris released a very dark thriller called Red Dragon, about a gifted FBI profiler named Will Graham, who comes out of retirement to assist in the investigation of a Serial Killer known as "The Tooth Fairy" (for his habit of leaving bite marks on his victims). Throughout the novel, Graham reluctantly seeks help from another serial killer, the brilliant if amoral psychiatrist Dr. Hannibal "The Cannibal" Lecter. The two had previously forced each other into mutual retirement, Graham by catching Lecter, and Lecter by nearly disemboweling Graham while trying to escape.

The novel was well-regarded for its unyielding gothic tone and the unnerving detail and care Harris put into the psychological dysfunctions of villain Francis Dolarhyde. The book was made into the movie Manhunter in 1986, starring William Petersen (yes, that one) as Graham and Brian Cox as Hannibal "Lecktor".

In 2002, there was a new film adaptation of Red Dragon, starring Anthony Hopkins and Edward Norton and keeping the original name this time. It was a moderate success, although some fans of Manhunter complained that a remake was unnecessary, though others were just happy to see something that didn't suck as bad as Hannibal. The film also included the focus on the Red Dragon's psychological torments, which was all but ignored in Manhunter, and features an ending more faithful to the book's.

Tropes used in Red Dragon include:

Lecter: You want the scent? Smell yourself.