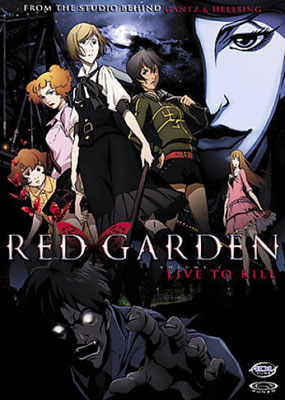 It started with the butterflies.

Claire, Rose, Rachel and Kate -- four New York City girls from the same school but from very different backgrounds and social circles -- are drawn together one night by a flock of mysterious butterflies that only they can see. Waiting for them are two mysterious figures -- a woman named Lula and her partner, JC -- who inform the four girls that they are dead.

In order to continue in their borrowed lives, the heroines are forced to fight for them. Each night, they must wait until midnight before they can rest. If the butterflies come to them before midnight, the girls must follow them and fight a twisted, bestial man with no help and no skills but their own will to live.

Thereafter, the lives of the girls (and the plot of the anime) revolve around coming to terms with these facts and the "suicide" of their friend Lise. Their deaths and the rabid men they are forced to fight all tie back to a strange and influential family.

Tropes used in Red Garden include:
Retrieved from "https://allthetropes.org/w/index.php?title=Red_Garden&oldid=1759790"
Categories: