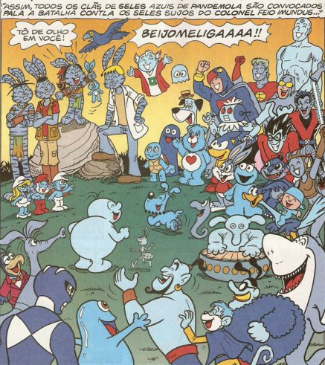 All the blue fictional people that could have been in Avatar.

Any work where the Homages and Shout-Outs are almost too numerous to count. Often these are fan works or comedies (goes triple if the series is a Long Runner), since it would be distracting to have so many of these in more serious works, save for comic relief moments.

But even in the appropriate works, how well this is done depends on most of the references being done well. Sometimes this works, sometimes not.

The references can even turn into multiple Genius Bonuses.

Examples of Reference Overdosed include:

Retrieved from "https://allthetropes.org/w/index.php?title=Reference_Overdosed&oldid=1750246"
Categories:
Cookies help us deliver our services. By using our services, you agree to our use of cookies.