Everything About Fiction You Never Wanted to Know.
< Regular Show
Jump to navigation Jump to search 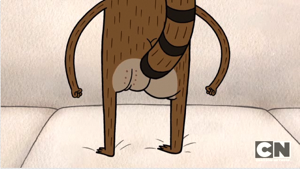 Rigby, a.k.a. The One Cheek Wonder.

Well, time to start this S.

Regular Show: it's anything but... a children's show. It's currently one of the most radar-dodging shows found on Cartoon Network that isn't a Cartoon Cartoon. Despite airing on what is ostensibly a children's network, it carries a TV-PG rating on American TV and has gotten away with a lot of crude, shocking, and risque moments. It's of note that this page was created after the first 5 episodes.