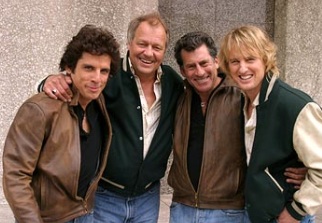 It's become common in remakes (or "reimaginings") of classic films and TV shows to placate hesitant and suspicious fans, who aren't sure whether the remake is going to stink from the head like yesterday's fish or do the original justice, by having one of the stars of the original stunt-cast in a cameo (or perhaps even a supporting role) as a nod to the source material. Sometimes this is done just to give the new project some legitimacy by implying that the remake has the approval of the original cast. Other times, the creator of the remake is actually a fan of the original and casts the cameo as a tribute. This has almost become standard operating procedure in Hollywood.

If it's not a remake, but a based-on-a-real-story dramatization, it's a Real Person Cameo.

See also Cameo, Casting Gag, and Mythology Gag. Compare to: I Want You to Meet An Old Friend of Mine, Actor Allusion, and Continuity Cameo.

Examples of Remake Cameo include:

Retrieved from "https://allthetropes.org/w/index.php?title=Remake_Cameo&oldid=1836260"
Categories:
Cookies help us deliver our services. By using our services, you agree to our use of cookies.