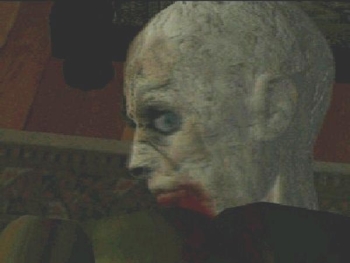 Um, got a little stain on your chin there.

Resident Evil -- sometimes called Resident Evil 1 to denote its chronological status -- is the first installment in Capcom's long-running Zombie Apocalypse Survival Horror series and the Trope Codifier and Trope Namer of the Survival Horror genre. Its Japanese title is Biohazard, a reference to the storyline (which is centered around a viral outbreak), but its Western release required a name change since "Biohazard" was too generic to be properly trademarked (a heavy metal band and an unrelated video game titled Bio Hazard Battle had already used it). RE1 was first released for the PlayStation and Sega Saturn, then had multiple alternate versions released afterwards. A remade version for the Game Cube (also known as the "REmake") -- which expanded certain plot points, added new areas, incorporated gameplay aspects of later Resident Evil games, and generally tightened continuity -- was released in 2002 (prior to Resident Evil 0's release). The original game (not the GameCube remake) is also available on the Nintendo DS as Resident Evil: Deadly Silence. As well as including the original game, Deadly Silence has an enhanced mode that mixes things up for you (dropping enemy and item placements in new locations) as well as adding some touch-screen interaction.

RE1 takes place in the Arklay Mountains near Raccoon City (which is located somewhere in the Midwestern United States) late in the evening of July 24, 1998. Raccoon City has been whipped into a panic due to a series of horrific murders of residents and tourists alike -- murders where corpses were found to have been partially devoured. Bravo Team -- one-half of Raccoon City's elite Special Tactics And Rescue Service (STARS) -- flew out to investigate the area a day prior, but when no radio contact is received after their departure, Alpha Team is deployed to find them.

Alpha Team discovers upon its arrival to the scene that Bravo Team's helicopter has crashed, its pilot has been mutilated, and there is no sign of Bravo Team's other members. While searching for their comrades, Alpha Team is attacked by a pack of partially-decayed dogs -- these savage beasts kill one teammate, then chase the others into what appears to be a deserted mansion. Alpha Team's survivors are team leader Albert Wesker, weapons specialist Barry Burton, Chris Redfield, and Jill Valentine. Players can control either Chris or Jill, and their choice determines what other characters they'll see during gameplay -- Chris will run into surviving Bravo Team medic Rebecca Chambers in his story, while Jill is accompanied by Barry. The group separates to investigate the situation regardless of character choice -- and that's when trouble really breaks loose.

The mansion turns out to be riddled with death traps and inhabited by bio-engineered killing machines; with limited firepower and no idea what's going on, Chris and Jill uncover dark truths about pharmaceutical giant Umbrella and their captain Albert Wesker as they explore the mansion for their teammates -- and a way out of their nightmare.

Tropes used in Resident Evil (video game) include:
Retrieved from "https://allthetropes.org/w/index.php?title=Resident_Evil_(video_game)&oldid=1857666"
Categories:
Cookies help us deliver our services. By using our services, you agree to our use of cookies.