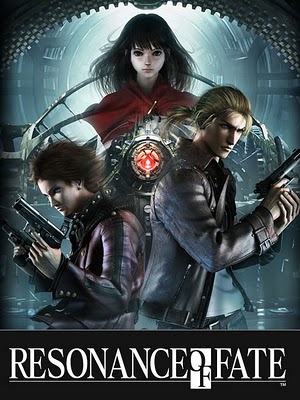 Known in Japan as End of Eternity, this is an Action RPG/Eastern RPG for the PS3 and Xbox360 created by Tri-Ace and published by Sega. It was released in January 2010 in Japan and in both America and Europe in March 2010. It received a port to PlayStation 4 and PC in October 2018.

Twenty Minutes Into the Future, the world has become a complete wasteland unable to support human life. As a last resort, humanity built a giant tower-like clockwork machine called Basel that would purify the environment in the immediate area. The last remnants of humanity flocked to live within and around the machine itself, turning it into the last bastion of civilisation in the world.

Hundreds of years later, the people of Basel have forgotten the original purpose of the machine, or even that there is a world beyond its borders. However, Basel has begun to break down and a mysterious ailment called Spontaneous Death Syndrome is striking down citizens seemingly at random. In response, the ruling Cardinals begin to plot ways to save their people from Basel's impeding failure.

Meanwhile, three individuals -- Vashyron, Zephyr and Leanne -- try to eke out a normal life for themselves in the middle of Basel. They work together as a Private Military Firm, gun-slinging mercenaries who will do any odd-job that pays well. However, their Mysterious Pasts are catching up to them and landing them on a collision course with forces outside their control or comprehension...

The Battle System of this game uses a mix of both Eastern RPG system and Action RPG elements, allowing the characters to move in real-time while shooting enemies with their array of guns and explosives in amazing manoeuvres, yet still maintaining a turn-based pace.

Tropes used in Resonance of Fate include:
Retrieved from "https://allthetropes.org/w/index.php?title=Resonance_of_Fate&oldid=1669490"
Categories:
Cookies help us deliver our services. By using our services, you agree to our use of cookies.