Batman Beyond: Return of the Joker

Everything About Fiction You Never Wanted to Know.
(Redirected from Return of the Joker)
Jump to navigation Jump to search 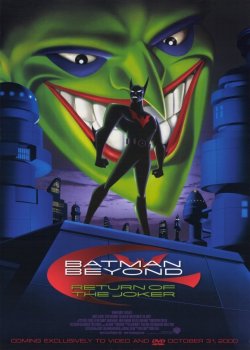 Terry McGinnis: "It's funny, I know about all your other major enemies but you never mentioned him. He was the biggest, wasn't he?"
Bruce Wayne: "It wasn't a popularity contest. He was a psychopath, a monster."

A feature-length adaptation of Batman Beyond, the DCAU series focusing on Terry McGinnis, Batman of a future Gotham who is being mentored by the original. Terry must battle the original Dark Knight's newly-returned Arch Enemy, The Joker.

Puzzling both Terry and Bruce is the fact that Joker seems not to have aged at all over the years. As Terry strives to solve this new mystery, he is forced to dive into his predecessor's dark past, unraveling the long-kept secret of what exactly split apart the bat-family, and how the conclusion of the rivalry between Joker and the Dark Knight occurred all those years ago.

The movie had the unfortunate timing of being made right after the Columbine Shooting and was hastily changed to lessen the violence. Thankfully Warner Bros held onto the original print and later distributed it as the uncut version.

Tropes used in Batman Beyond: Return of the Joker include:

"You killed him, didn't you? He was gonna do something so terrible that you had no other choice."

Batman: I'll break you in two.
Joker: *laughs* Oh Batman, if you had the guts for that kind of fun you would have done it years ago. I, on the other hand...

Joker to Batman (Bruce): "It'd be funny if it weren't so pathetic. [beat] Oh, what the heck, I'll laugh anyway."
Batman (Terry) to Joker: "You make me laugh... but only because I think you're kinda pathetic."

Joker: "You're welcome to try and stop us, but I'm not taking bets on that happening anytime soon. Toodles."

Bruce: "Stupid kid. You don't know what you want. None of you ever did."

Joker: "Oh, good, the beam's headed here! Now I'll have to start all over again. Thanks for wrecking everything, kid. See ya round."
Terry: "Hold it!"
Joker: "Oh, wise up, junior - GAME'S OVER!"