Everything About Fiction You Never Wanted to Know.
< Revolutionary Girl Utena
Jump to navigation Jump to search 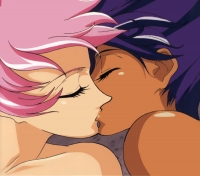 Where does one start with the amount of Les Yay and Ho Yay in Revolutionary Girl Utena? The whole premise of the plot is Utena's desire to be a "Prince" to Anthy's "Rose Bride", and Akio's manipulations to make sure that he milks Utena's dreams for his own benefit.