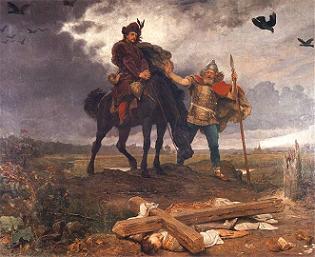 Bad things happened in his absence -- that's why he returns.[1]

This is the common High Fantasy plot that involves restoring the rightful heir to the throne. Requires, obviously, the Royal Blood trope; it doesn't work in a kingdom with elective monarchs. (Not that many works actually use elective monarchies.)

Sometimes started off by a Moses in the Bulrushes scenario. The true ruler may be identified by a Distinguishing Mark, such as a birthmark, or a Orphan's Plot Trinket. The rightful monarch may have been been a King Incognito for his own safety until the right moment, or he may learn his Secret Legacy and go to claim it, in a Rags to Royalty plot. Next thing you know, He's Back. This stuff is likely to end in an Awesome Moment of Crowning.

Related to Fisher King. It wouldn't be so important who sits on the throne if he wasn't magically linked to the wellbeing of the whole country. See also the King in the Mountain. Sister Trope to A Protagonist Shall Lead Them, who may be royalty but often is not.

Supertrope of the Man in the Iron Mask.

Examples of Rightful King Returns include:

Retrieved from "https://allthetropes.org/w/index.php?title=Rightful_King_Returns&oldid=1771396"
Categories:
Cookies help us deliver our services. By using our services, you agree to our use of cookies.