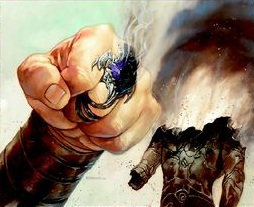 Rings imbued with some kind of Functional Magic or Phlebotinum, giving them powers usually to a supernatural degree.

These rings can have many uses, for good or evil. They can be for commoners or royalty. They can be extremely fancy or deceptively simple. They can be passed down as an heirloom, or found in a Cracker Jack box.

Either way, these rings are of great use to whoever holds them, assuming they are safe to use, if you don't care for the cost, and if it allows you to use it. Don't be surprised if you have trouble getting it off.

Unrelated to Rings of Death, which are more like hoops. Though distinct, may overlap with Amplifier Artifact if the ring also enhances already possessed powers.

Despite the name, Green Lantern Ring is not actually a Sub-Trope of this. The Trope Namer for that trope, however, is an example of this one.

Examples of rings of power include: