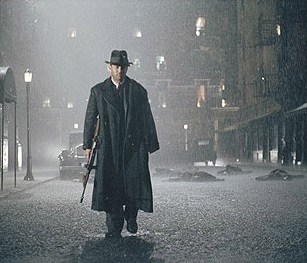 A 2002 film, directed by Sam Mendes, based on a comic of the same name (itself inspired by the manga Lone Wolf and Cub). Mobster Michael Sullivan (Tom Hanks), and his son who followed him to work, witness the mob boss (Paul Newman)'s son Connor (Daniel Craig) shoot a fellow employee (Ciaran Hinds) for embezzling The Syndicate.

Connor tries to kill the witnesses off, but botches the job and ends up killing Mike's wife and younger son. Expecting revenge, the mob takes out a Contract on the Hitman and Mike and Peter go on the run, pursued by a chillingly psychopathic assassin, Maguire (Jude Law).

The film deals largely with father-and-son relationships -- both the protagonists and the villain of the movie have deep issues with paternal favoritism and respect. Whereas Connor forces his father to try to protect him at the cost of a man he clearly loves as a son, Michael becomes determined that his only surviving child will not become like him.

Not to be confused with any other Road To movies.

Tropes used in Road to Perdition include:
Retrieved from "https://allthetropes.org/w/index.php?title=Road_to_Perdition&oldid=1830846"
Categories:
Cookies help us deliver our services. By using our services, you agree to our use of cookies.