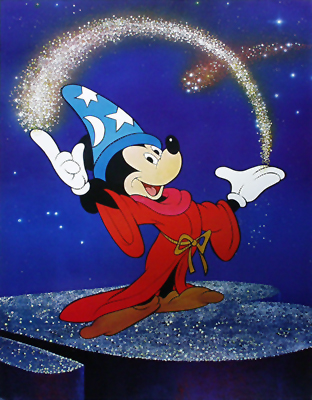 The robe is stylish. The hat is magic.

Magic users, especially in medieval fantasy, will almost always wear a Robe and Wizard Hat of one sort or another.

The particular type of robe varies, and even those mages who eschew the robe tend to wear cloaks, capes, or (for more modern characters) trenchcoats. At least in part, this seems to be because the loose, billowy clothes look that much more impressive during a magic-induced Chunky Updraft or Dramatic Wind. Even the Stripperiffic costumes worn by nymphet sorceresses tend to have a few loose scraps of cloth fluttering about.

On the other hand, nobody who wears a pointy hat can be anything but a magician of some kind. No matter what, the pointy hat is a guarantee of magical power, or at least aspirations thereto. (The primary exception is if you're in the Deep South. They may have an "Imperial Wizard" leading them, but that's a way different group there.) Depending on the setting, exceptions may be made if you are a princess locked in a tower (this version usually has a ribbon of sheer fabric coming off of the top and is technically called a Steeple Hennin), some manner of gnome (this version is usually red, and gnomes are generally magical) or of course, the classic Dunce Cap, but in such a case, a magic-user can be identified by the fact that their pointy hat has a brim, while the hats of princesses, gnomes and dunces do not. (If it's your head that's pointed, you're reading the wrong trope; see Coneheads.)

Wizarding School students tend to be wear a blend of this and whatever is considered that country's traditional school uniform; expect the more powerful teachers to do it straight.

The lesson you should be taking from all of this, of course, is that if you see someone wearing a pointy hat, then they will also be wearing a robe. This trope is a subtrope of Nice Hat and Badass Long Robe, naturally. If the hat itself ends up being magical than it may be a Hat of Power. Very often this trope is accompanied by a Magic Staff. Sub-trope of Stock Costume Traits. See also Wizard Classic for a character type who is especially prone to wearing this outfit.

It's often believed that the trope comes from the Norse god Odin's traveling outfit.

Not to be confused with the fanfic I Put On My Robe and Wizard Hat, which also derived its name from the Trope Namer copypasta.

Examples of Robe and Wizard Hat include:

Retrieved from "https://allthetropes.org/w/index.php?title=Robe_and_Wizard_Hat&oldid=1942272"
Categories:
Cookies help us deliver our services. By using our services, you agree to our use of cookies.