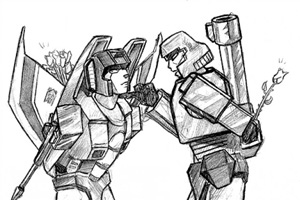 Plenty of robots to ship in this show.

Basically this is fans Shipping a sentient machine, whether a robot, computer or otherwise, with someone else, usually an organic lifeform or human, or even another machine. Overlapping heavily with Fan-Preferred Couple, robo ships differ in that the relationship is not sexual in nature and sex may not even be possible for the couple in question... And people ship them together anyway due to compatible personalities. This can occur due to fandom reading things into a platonic friendship, a Relationship Writing Fumble that makes the couple in question seem closer than ordinary friends, or because canon is either sparse on pairings or the ones it does have aren't very popular. Robo Ship pairings tend to run into some problems due to What Measure Is a Non-Human? and Fan Dumb, so expect the same amount of Die for Our Ship as you would with a normal coupling.

Semi-justifiable if the object in question is an Instant AI, Just Add Water or Ridiculously Human Robot in-as-far as having personality and thinking, though Your Mileage May Vary on whether or not it's still Squick. Can even end up with a Robotic Spouse.

Examples of Robo Ship include: