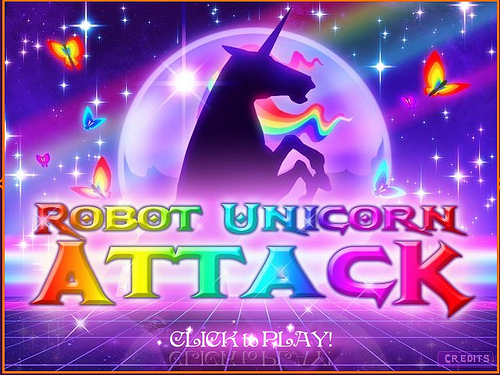 Robot Unicorn Attack is a free Flash game from Adult Swim. You're a rainbow-adorned robot unicorn who runs across a pink, sparkly, brightly colored world, collecting fairies, jumping onto platforms, and dashing about while a happy, upbeat Award Bait Song plays in the background. There are only two buttons: Z to jump and X to dash. Did we mention that they had a developer devoted entirely to "sparkles and unicorn tears"?

Oh, and it may just be the most awesome game ever.

This is one of the few games endorsed fully and wholeheartedly by Encyclopedia Dramatica and The Imageboard That Must Not Be Named. Repeat: this is liked by the people that will derisively call something "gay" if it even slightly falls short of expectations. They embrace Robot Unicorn Attack with open arms, even changing the website for a day, filling it with Yaranaika rainbows to honor it.

There are iPhone and Android ports available for wish-chasing on the go.

Two expansion packs are also now available, and are still awesome even though one of them is... not as harmonious as you know it to be. See the Robot Unicorn Attack: Heavy Metal Edition entry for more info on that one.

In February 2012, a sequel was released: Robot Unicorn Attack Evolution. In this game (available on Facebook), the gameplay remains mostly the same; however, there are added additions of daily challenges, the ability to purchase powerups for the game using earned currency, and the like. The most notable addition is that for every four stars you smash in succession (And trust us, it ain't easy), you evolve into another creature and teleport to another world where there are more pixies to collect.

Has nothing to do with Gundam Unicorn.

Retrieved from "https://allthetropes.org/w/index.php?title=Robot_Unicorn_Attack_(Sugar_Wiki)&oldid=1887194"
Categories:
Cookies help us deliver our services. By using our services, you agree to our use of cookies.