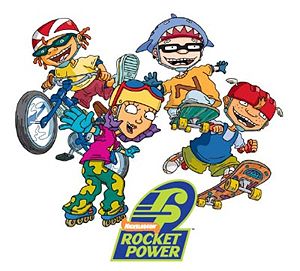 Rocket Power was a popular Nickelodeon cartoon that ran from 1999 to 2004, produced by the same people who made Rugrats and As Told by Ginger. It focused on the (mis)adventures of a foursome of kids living in Ocean Shores, CA. The title refers to brother and sister duo Otto and Reggie Rocket, ostensibly the more "main" of the core cast of four. The other two included Otto's friend Maurice "Twister" Rodriguez, and new kid Sam "Squid" Dullard.

The show's hook was that the four main characters were all into extreme sports, and nearly every episode featured some such activity at the center of the episode's events. Even if it wasn't the core of the plot, each episode would generally begin with the kids surfing, or hanging out at the local skate park, Madtown. Over the course of the series, everything from relatively tame sports such as roller hockey to extreme and obscure sports like zorb balling were featured in the show.

Other than the main four, other regular characters included Otto and Reggie's dad, Ray, who owned a restaurant on the Ocean Shores pier; his partner Tito, a native Hawaiian who spoke with the requisite accent and was fond of spouting nonsensical proverbs, and Twister's older brother, Lars, who was often seen picking on the main characters. Also included were the Rockets' next-door neighbors, the Stimpletons; Madtown's owner, cool Jamaican dude Conroy; and various other kids the same age as the main characters.

Tropes used in Rocket Power include:
Retrieved from "https://allthetropes.org/w/index.php?title=Rocket_Power&oldid=1842554"
Categories:
Cookies help us deliver our services. By using our services, you agree to our use of cookies.