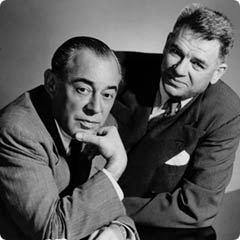 Rodgers at the left, Hammerstein at the right.

American songwriting team consisting of Richard Rodgers (1902-1979, composer) and Oscar Hammerstein II (1895-1960, lyricist). Together they earned 34 Tonys, 15 Academy Awards, a Pulitzer and two Grammys. As the quote above indicates, their shows were well on the "idealist" end of the Sliding Scale of Idealism Versus Cynicism; despite often dealing with serious topics (racism in South Pacific, sexual harassment in Oklahoma!!, spousal abuse in Carousel), they're a by-word for perky, heart-warming, optimistic musicals.

Before their creative partnership began, both had been involved in earlier collaborations; Rodgers was acclaimed for his work with Lorenz Hart, while Hammerstein co-wrote Show Boat (arguably the first modern musical, and written in a style which foreshadowed the work of this duo) with composer Jerome Kern.

Curiously, Oscar Hammerstein knew Stephen Sondheim as a young man and was a formative influence on him (Sondheim has said that "if Oscar was a geologist, I would have been a geologist").

Best known for their Broadway musicals:

Retrieved from "https://allthetropes.org/w/index.php?title=Rodgers_and_Hammerstein&oldid=1778744"
Categories:
Cookies help us deliver our services. By using our services, you agree to our use of cookies.