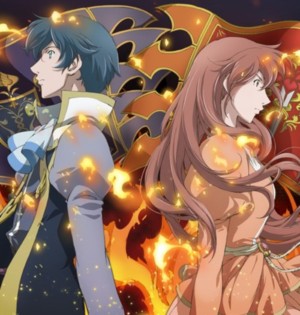 It Was a Dark and Stormy Night. Lord Leontes Montague, head of the Montague family, systematically cut his way through the ruling Capulet family and their retainers in a bloody coup. Only one member of House Capulet survived: the two-year-old Capulet heiress, Juliet Fiamatta Ars Di Capulet, who was spirited away by the captain of the guard and the few retainers that made it.

Fourteen years later, Lord Leontes Montague is the tyrannical leader of all of Neo Verona. The surviving Capulet retainers are in hiding beneath a theater company run by a sympathetic playwright named Willy. Juliet is disguised as a boy named Odin, and she has no idea who she really is - all she knows is that she has to dress up as a male and work as Willy's stagehand. Whenever she can sneak out, she fights against the oppressive Montague regime as the Red Whirlwind, a Zorro-esque vigilante. As the Red Whirlwind, she gets into a bind and is saved by Romeo Candore Van di Montague, the idealistic only child of Lord Montague. Some time later, "Odin's" friend Emilia, Willy's top actress, invites "Odin" to a high-class party with her, thinking that "he" would make a very pretty girl. One case of mistaken identity later, Juliet is alone at the party, where she runs into Romeo again. You all know where this is going, right?

Romeo X Juliet is very loosely based on Romeo and Juliet, emphasis on the "loosely". While there is still the plot of the Star-Crossed Lovers from rival families, it shares time with the eventual coup by the Capulet loyalists once Juliet is told her true heritage -- yes, Romeo plays second fiddle as Juliet's love interest. As for the characters...most of them resemble the originals in name only. Nevertheless, that doesn't stop this series from being good on its own merits.

The series also draws a bit on other William Shakespeare plays for both character names and plot elements. The cross-dressing and disguises reach the point that Romeo meets Juliet three times without realizing that they are the same person. Inevitably, someone else dresses up as the Red Whirlwind. And, of course, there's a play within the play that matters to the plot.

As I'm sure you could have guessed, this is generally a serious anime, and features action scenes on a regular basis, though the fights never reach the absurd levels of a lot of Shonen anime. Just don't forget the Dragonhorses! (think: Pegasus).

This anime is available legally in the U.S. streaming on Funimation's Video Portal

Not to be confused with the live-action movie Romeo + Juliet.

The examples below contain unmarked spoilers for plot points that are carried over from the original play. If you are one of the few people who don't know the ending to Romeo and Juliet, you are advised not to read any further.

Tropes used in Romeo X Juliet include:
Retrieved from "https://allthetropes.org/w/index.php?title=Romeo_X_Juliet&oldid=1739369"
Categories:
Cookies help us deliver our services. By using our services, you agree to our use of cookies.