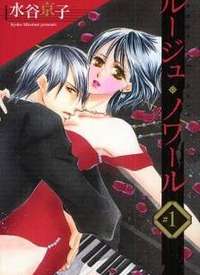 When Ayane Tezuka was 19, she was a cute college student aiming to be a piano player. In these days she also was the private tutor of a young rich boy, Kou Narumiya, and sparks simply flew between them! However, not only Kou was from one of the richest families in Japan but he was only 14, despite being much Younger Than They Look. Once Kou's mother noticed and harshly warned Ayane to not get too close to Kou, such an attraction ended up in... well, not good terms.

Flashforward to six years. 25-year-old Ayane is now a beautiful school teacher in an all-girls school and her life seems to be placid and perfect, but she hasn't really forgotten Kou. All of a sudden, while attending a jazz-piano audition, she finds the now older Kou again. Old feelings sort-of return, and Ayane's heart is a mess from then on...

Rouge Noir is a short jousei manga by Kyouko Mizutani, spanning two volumes. If you wish, you can read it here.

Rouge Noir has the following examples:

" Six years ago, Kou violated me. (...) Even I think there's something wrong with me. (...) That sound and Kou himself, despite the calamitous past that we have, are drawing me in."

"What a pitiful woman! Are you only capable of finding happiness through the misfortune of others?!"