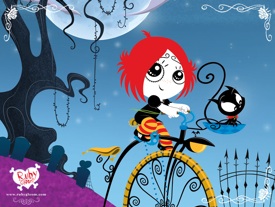 Ruby Gloom (2006-2008) is a Canadian Animated Show originally created as a tie-in with a line of stationery. Despite the melancholy feel of said stationery, the show is fairly upbeat; in fact, it's a prime example of the Perky Goth mentality.

Two seasons, a combined 40 episodes, were released, although at somewhat hectic intervals across different regions.

Tropes used in Ruby Gloom include:
Retrieved from "https://allthetropes.org/w/index.php?title=Ruby_Gloom&oldid=1951751"
Categories:
Cookies help us deliver our services. By using our services, you agree to our use of cookies.