Everything About Fiction You Never Wanted to Know.
Jump to navigation Jump to search
/wiki/Rupert Murdochcreator 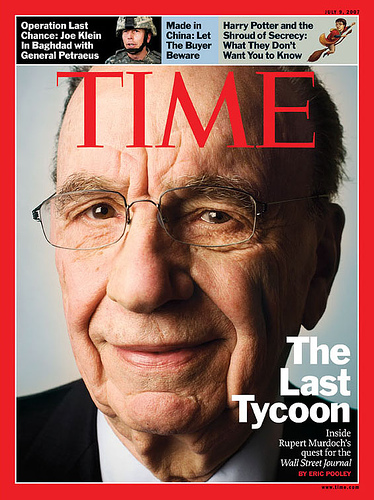 Keith Rupert Murdoch is one of the most powerful men in the world media. He controls News Corporation, which owns a dizzying number of newspapers, film production companies including 20th Century Fox, television studios, channels including the Fox network and the new MyNetwork TV network, the Fox station group (comprising 27 stations; 17 are Fox and 10 are My Network TV; Fox has the most network-owned stations of the six major networks in the US) satellite television providers, book publishers, magazines and recording studios internationally. He even owns half of Australia's National Rugby League.

You can basically tell who is going to win an election in Britain based solely on whom Murdoch is supporting at the time, since he controls The Sun, and The Times and BSkyB, making him second only to The BBC (who have to be impartial) in media ownership in the United Kingdom (Explaining why most of his papers are incredibly critical of the BBC in almost all capacities). His influence is so great that after an unexpected win for the Conservatives in the 1992 election the Sun triumphantly announced 'It's the Sun wot won it', and the triumphant Conservatives practically acknowledged as much. Potential prime ministers get one meeting a year to wow Murdoch into supporting them. His cosy position of influence is in some jeopardy after several years of allegations that the News of the World hacked into the phones of several celebrities and famous people, which has now extended to include hacking the phones of the families of dead soldiers and 7/7 victims and deleting messages on the phone of a murdered girl to listen in on more. Shortly afterwards, Murdoch's son announced that the paper was being shut down due to the controversy (but another Murdoch rag, the Sun on Sunday, quickly popped up to replace it, despite being at least as explicit in its hacking activities as the News of the World.) Despite this, the scandal has spread to other News International titles and also abroad, with his US companies also being investigated as a result (However thanks to his almost total ownership of the British media, the reporting on the phone hacking scandal has perhaps not been as revealing and scandalous as it should have been). His influence may be waning in the aftermath of these revelations, with the Parliamentary Select Committee on Culture, Media and Sport publishing a report on May 1st, declaring "that Rupert Murdoch is not a fit person to exercise the stewardship of a major international company" and broadcasting regulator Ofcom looking into whether BSkyB can retain its broadcasting licence while News Corp still owns 39% of its shares.

Murdoch is less godlike, but still very influential, in the United States; his ownership of the Fox News Channel, the de facto news source for conservatives and the top-rated news channel, means that he is a trend-setter for the Republican party. The Wall Street Journal, Murdoch's most recent conquest, is a bible in financial circles, a rallying place for Conservatives editorally, and a respected provider of straight news even in liberal circles, though less so since the buyout. The only tarnish is the New York Post, a once-respected paper that, upon Murdoch's purchase, became that city's version of The Sun.

Back at home, Murdoch retains a dominant role in the Australian media, owning newspapers in nearly every major city in the country (with the Fairfax press giving many cities legitimate competition). The Australian, the country's only general-interest national newspaper, is a slightly more respectable version of USA Today. Due to Australian laws, Murdoch cannot own broadcast stations there anymore, but he is a strong player in cable television. Similar to the Blair example above, he voiced approval of Kevin Rudd before the man was elected Prime Minister. Despite a landslide victory Rudd was rolled by his own Labor party with surprising speed, and the new Labor regime has been excoriated most ruthlessly in Murdoch's press (whether this is due to partisanship or not is controversial).

He bought Myspace just as Facebook was on the rise, and sold it off a few years down the line, when it was dead and buried.

Parodied in Fierce Creatures, the spiritual sequel of A Fish Called Wanda. Part of the inspiration for Kim Newman's devil character Derek Leech (the other parts being Richard Branson and Satan). Elliot Carver in Tomorrow Never Dies is similar, but actually based on Robert Maxwell. Nicknamed "The Dirty Digger" in Private Eye. A Bit of Fry and Laurie had the angel in its Wonderful Life sketch push him back off the bridge. And Keith Olbermann portrays him as either a pirate or Star Wars' Emperor Palpatine. Arr!

When the British TV playwright Dennis Potter was diagnosed with terminal cancer, he named his cancer Rupert after Mr. Murdoch.

Long story short, people who love him will say of him, "He's the man!" People who hate him will agree verbatim.

Retrieved from "https://allthetropes.org/w/index.php?title=Rupert_Murdoch&oldid=1524090"
Categories:
Cookies help us deliver our services. By using our services, you agree to our use of cookies.