Everything About Fiction You Never Wanted to Know.
Jump to navigation Jump to search
/wiki/Russell Brandcreator 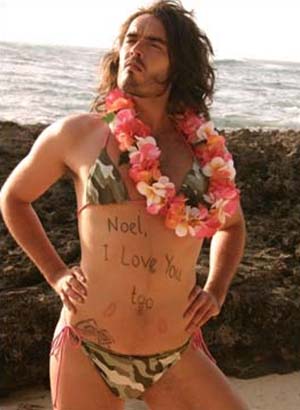 Currently one of the UK's (and to a lesser extent, America) more popular comedians, Russell Brand is known for his somewhat abstract and off the wall demeanor. He's best known in the UK as the host of The Russell Brand Show. Part of his act is explaining the joke, which usually makes it funnier. He's also known for playing sexually open and airy rock star Aldous Snow in Forgetting Sarah Marshall and its spin-off Get Him to The Greek. His most recent works involve his two title roles in the remake of the classic Dudley Moore film Arthur and as the voice of a slacker Easter Bunny in Hop.

There appears to be a sharp division of opinion in Britain regarding Russell Brand. You either love or loathe him, you either regard him as a comic genius or as an untalented Lothario who got there solely because of his looks. It tends to boil down to two things: (a) whether you like his sort of comedy or you don't (in which case you will look on in bemusement wondering what this idiot is drivelling on about, and why anyone in their right mind thinks he's talented) and (b) whether or not you think abusive humor is funny.

In 2008, Brand was given a Saturday night prime-time show on the prestigious BBC Radio Two station. He was protected and supported by his mentor, Radio Two station controller Lesley Douglas, who kept faith with him despite a pretty much continual trickle of complaints about the content of his show, and who allowed him to do and say pretty much what he liked on air. Matt Morgan, meant to rein him in and curb his worst excesses, became a sychophantic sidekick for whom the Boss was never wrong. This involved explicitly sexual content and the harrassment of guests and celebrities: Chrissie Hynde, lead singer of The Pretenders, walked out live on air after Brand made reference to having slept with her daughter, and had propositioned Chrissie to join them in threesome sex. A complaint against the show, made in confidence to the BBC, was read out on air and publicly vilified, causing some humiliation for the listener who had made it. Other Radio Two presenters, most notably veteran DJ Paul Gambaccini, had been publicly warning that Brand was a loose cannon who was going to go off in a way that would cause the BBC a lot of embarrassment.

So the BBC management could not say it had not been warned nor had not seen warning signs, when one Saturday night in November, Brand and guest Jonathan Ross rang up veteran actor Andrew Sachs (Manuel from Fawlty Towers) and among other things, boasted that Brand had slept with his grand-daughter, a boast later shown to be truth. In the next week or two, the BBC received tens of thousands of complaints. While there is some truth to the counter-claim from Brand's supporters that anti-BBC newspaper The Daily Mail whipped up a faux-outrage[1], at least as much was accomplished by traditional Radio Two listeners who had resented Brand being imposed on their Saturday night and saw a chance to do something about it. Both Russell Brand and Jonathan Ross suffered severe consequences for their prank.

Brand has had sex with just about every woman in the UK (and beyond), including a couple of famous ones, and he loves to brag about it -- which got him into trouble more than once. He once married kitschy pop star Katy Perry (although he has since filed for divorce). Russell is also close friends with Noel Fielding, and the two formed "The Goth Detectives" on The Big Fat Quiz of the Year.

He's the only man that Peter Andre has ever kissed.

‘Citing tropes associated with Mr. Brand:
Retrieved from "https://allthetropes.org/w/index.php?title=Russell_Brand&oldid=1778996"
Categories:
Cookies help us deliver our services. By using our services, you agree to our use of cookies.