Everything About Fiction You Never Wanted to Know.
Jump to navigation Jump to search
/wiki/Samuel Johnsoncreator 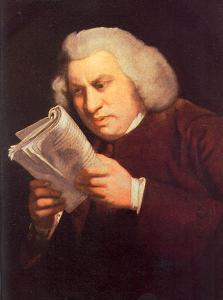 "He that will enjoy the brightness of sunshine, must quit the coolness of the shade."

Samuel Johnson (1709 - 1784) was an English writer, noted for his sesquipedalian elocution, his political and social reactionism, his gruff irasciblility, and his sound literary and moral judgement. His works include A Dictionary of the English Language[1] (which included such famous definitions as "NETWORK -- Any thing reticulated or decussated, at equal distances, with interstices between the intersections" and "OATS -- A grain which in England is generally given to horses, but in Scotland supports the people"), criticism of William Shakespeare, essays in The Rambler and The Idler, several odes modelled on Classical compositions, and a novella, The History of Rasselas, Prince of Abissinia. He also wrote a popular book about his travels in the Scottish Highlands - a location as remote to English readers as Outer Mongolia today.

Although Johnson's views of black people were as paternalistic as any man's of the time, he loathed the institution of slavery; when once asked to give a toast, he shocked the room with "Here's to the next insurrection of the Negroes in the West Indies!" He hated the American revolutionaries not just for their disloyalty to the Crown but also for (as he saw it) the unforgivable hypocrisy of clamoring for "liberty" while denying it to their slaves. He himself left his entire estate (less a few legacies) to his black servant, Frank Barber, who had been born a slave.

As a critic, Johnson believed strongly in logic and decorum (in the 18th century sense of probable characterization) in literary works; moreover, he believed that they should be judged on moral as well as artistic grounds. He was a firm Classicist, and had a strong distaste for the incipient Romantic movement. The Romantic movement returned the favour, disparaging him as "Ursa Major -- the Great Bear"; Elizabeth Browning wrote of his Lives of the English Poets that he "wrote the lives of the poets and left out the poets!".

Some modern writers have suggested that Johnson suffered from obsessive-compulsive syndrome. Doctors with historical interests, however, are generally agreed that his symptoms are much more like Tourette's Syndrome than OCD. He also suffered from extreme bouts of depression (known as "hypochondria" or "melancholia" in his day) that made him fear for his sanity and beg his friend Hester Thrale to "chain him up" if he ever did go insane. At least one 20th century writer took that to mean that he was having an S&M affair with her.

His fans called him the Great Cham (ie. Khan) of Literature, and his fame during his lifetime was such that he was badgered by friends, acquaintances, and even the general public on everything from career advice to funeral inscriptions. These days he's chiefly known nowadays through James Boswell's Life of Johnson, which is considered the greatest Biography in English. Such are the vagaries of fame.

Tropes associated with Dr. Samuel Johnson or found in his works:
Appearances in fiction:
Retrieved from "https://allthetropes.org/w/index.php?title=Samuel_Johnson&oldid=1613251"
Categories:
Cookies help us deliver our services. By using our services, you agree to our use of cookies.