Everything About Fiction You Never Wanted to Know.
Jump to navigation Jump to search
/wiki/Samuel Taylor Coleridgecreator 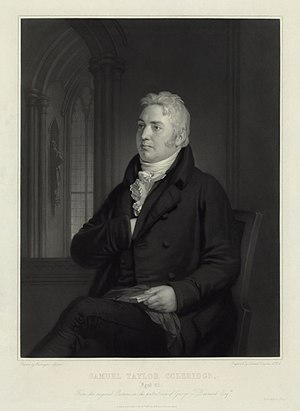 Samuel Taylor Coleridge (1772–1834) was an English Romanticism poet and philosopher. His famous works include The Rime of the Ancient Mariner and Kubla Khan.

Oft-mentioned details of his life include his opium addiction (he started taking it for medical reasons, and got hooked); and the tale of the Man From Porlock, who knocked on his door while he was writing Kubla Khan, distracting him and causing him to forget how the rest of it went.

He also wrote several works of literary criticism, and coined the phrase "Willing Suspension of Disbelief".

Interestingly, he was also friends with William Wordsworth and collaborated with him on the first publication of Lyrical Ballads, which was published anonymously.

Works by Coleridge with their own trope pages:
Coleridge in fiction: