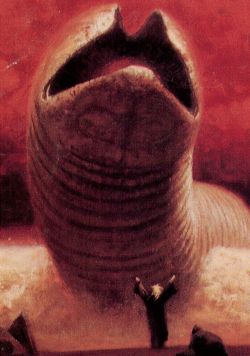 Shai-Hulud, the Great Maker, the Grandfather of the Desert, the Worm Who Is God

So you're travelling the desert. A dangerous place, isn't it? You've got dehydration to worry about, of course, then there's heatstroke, scorpions, snakes, pack animals of dubious trustworthiness, and native peoples who may be ruthlessly territorial or just poorly disposed toward your particular ethnicity. But if you think that's all you've got to worry about, check your setting: if you're somewhere other than Earth, be it a sci-fi or fantasy world, then tread softly; without rhythm and check the ground often, because you may just wind up with a case of Sand Worms.

Scaled-up versions of real-life worms, these beasties tunnel through sand and dirt, being halted only by rocky terrain or artificial ground, though often enough they can force their way through that as well. They generally have no eyes or ears, rather detecting vibrations through their bodies. Beyond these basic traits, even the most incidental similarity to real creatures ceases. Sandworms are big, typically ranging between man-sized and resembling something like a moving mountain. They seem to be carnivorous, since they tend to go out of their way to attack and eat anything trudging upon the surface, either leaping without warning to swallow the prey whole or approaching with a telltale furrow of disturbed earth, depending on whether the writers want to give the target a chance to run away. Arguably, they could just be really, really territorial. Aside from the worm-like shape, these monsters are also recognizable by their mouths: they're always either completely round or trifurcated, lined with rows of teeth, and with long tentacular tongues, the better to grab you by the feet and reel you in.

Intelligence varies but is usually pretty animalistic. They may be loners or travel in packs, again depending on how threatening the writers want them. Since they hunt almost exclusively by dint of sound transferred through the ground, they can be diverted by standing still or setting off something loud and percussive a ways off.

Similar monsters can be found in snow or water. These are, perhaps, a bit more believable.

Even in the best of cases, these are obvious instances of artistic license; it simply isn't possible for a creature so dense and large to pass that easily through heavy earth, even if it is fine sand. Failure to observe the Square-Cube Law also applies, especially in larger cases, and especially since worms don't have any internal support structure such as a skeleton. (Exceptions may be made for low-gravity worlds.) Not to mention how does that thing sustain itself? They're usually depicted as being carnivorous, and huge. Nothing is even close to its size, and it doesn't feed that often, and even so, it'd be sustaining itself on creatures less than a hundredth its size, and it lives in the deserts, which have much less biomass than other biomes.

Though when you think about it, they're kind of like scaled-up, desert-dwelling earthworms.

A related creature is the Landshark, a ground-burrowing creature with the appetite, temperament, and often appearance of a Shark.

Examples of Sand Worm include: