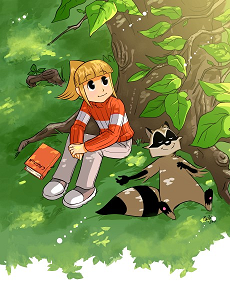 A webcomic about friendship, life and the art of (not) eating squirrels.

Sandra and Woo is a English and German-language webcomic by Oliver Knörzer and Powree, about the adventures of middle-schooler Sandra North and her pet talking raccoon, Woo. It's drawn in a manga style with some western comic stylizations, and makes use of mostly unconnected story arcs. Basically, imagine Calvin and Hobbes aged up a few years and with some more serious plot threads.

Though the story most often focuses on Sandra and Woo's misadventures, the story will, at times, turn to focus on one of Sandra's two best friends, Cloud and Larisa, or Woo's adventures with his woodland friends, Shadow the fox and Sid the squirrel.

Tropes used in Sandra and Woo include:

The New Larisa 500:
0 to Flirtatious in two seconds flat!

Lily: Let’s mate once again instead. You’re infinitely better at that.
Woo: WOO!

Yuna: Freedom for the peoples of Burma, motherfuckers!

Sandra: I have no idea what you did, but it was as if one voice was suddenly silenced, and millions suddenly cried out in joy.