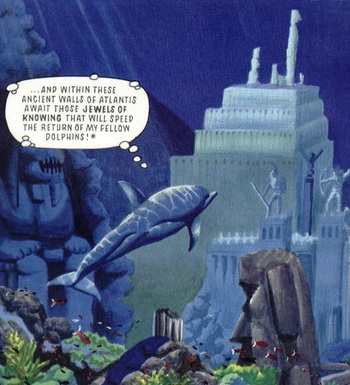 Many scientists, writers, and laypeople consider cetaceans (dolphins and whales) to be very intelligent — almost, or even equally, as intelligent and self-aware as human beings. But we can't talk to them, so we can't be sure.

This trope is for dolphins and whales that quite clearly demonstrate their human-level intelligence by talking to non-cetaceans, communicating via telepathy, using magic or technology, piloting spaceships, or other activities generally beyond merely-clever animals.

Sapient cetaceans may demonstrate obvious sentience because of genetic engineering or magical phlebotinum, or human-level intelligence and the skills to prove it may just be natural traits of cetaceans in the setting.

For dolphins in particular, this may sometimes overlap with Friendly Playful Dolphin, or Heroic Dolphin, or both, but not always. Sometimes it's the result of being an Uplifted Animal.

Examples of Sapient Cetaceans include:

Retrieved from "https://allthetropes.org/w/index.php?title=Sapient_Cetaceans&oldid=1733990"
Categories:
Cookies help us deliver our services. By using our services, you agree to our use of cookies.