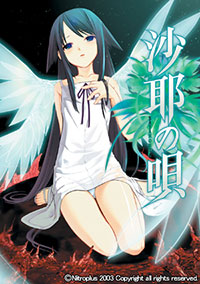 Looks can be deceiving.

Each night, I went to sleep wishing that this would turn out to be a nightmare.
Yet each morning I awoke to find that the world was just as horribly warped as it was the day before.
I have to live while blending in, while acting like one of them. Just as I've done these past three months, I will continue to do for the rest of my life.

A Visual Novel / H-game by Nitroplus, Saya no Uta ("Song of Saya") revolves around a medical school student, Fuminori Sakisaka. Before the main plot, he was involved in a car accident which killed both his parents. He was saved, however, by an experimental brain surgery... which just happened to drastically alter his perception of the world. Everything now appears to him as if it were made from guts, slime, and gore.

One night while still in the hospital, a girl dressed in white appears before him. To him she appears completely normal, and above that, downright beautiful. Rather than consider the why of this, he latches onto her as his reason to keep living, and convinces her to move in with him once he's released from the hospital.

The more things go on, however, the more Fuminori withdraws from the rest of his life. His friends become increasingly worried for his sake, including Yoh Tsukuba, who has had a crush on him since before the accident. His doctor, Ryoko Tanbo, still has the impression that there's something he's not telling her... This is true enough; out of fear of becoming a lab experiment, Fuminori never told her (or anyone save Saya) about the way he now sees the world. Finally, there is his search for information on Professor Ougai. All these things and the decision on whether Fuminori wants to be normal interact to drive the plot forward.

Tropes used in Saya no Uta include:
Retrieved from "https://allthetropes.org/w/index.php?title=Saya_no_Uta&oldid=1652851"
Categories: