Scandinavia and the World 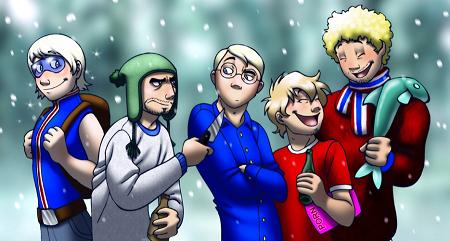 Scandinavia and the World is a popular webcomic by Deviant ART member Humon. It is a comic about stereotypes, history and culture in the form of national personifications interacting with one another (not unlike Axis Powers Hetalia), but focusing on, well, Scandinavia. The main characters are Denmark, a cheerful, but culturally naive party boy; Norway, a friendly and calm nature lover; and Sweden, the uptight technology expert.

An Animated Adaptation (for the Web) is in the works, though progress is sporadic. Now has its own wiki (still being built).

Humon has two other webcomics, Love and Tentacles and Niels. In addition, her DA account regularly features works based on Northern European folklore, with plenty of notes.

Tropes used in Scandinavia and the World include:

Retrieved from "https://allthetropes.org/w/index.php?title=Scandinavia_and_the_World&oldid=1854261"
Categories:
Cookies help us deliver our services. By using our services, you agree to our use of cookies.