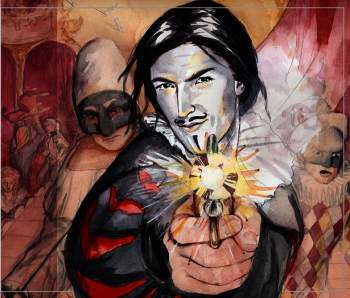 "He was born with a gift of laughter and a sense that the world was mad."

So begins Rafael Sabatini's classic novel of revenge. First published in 1921, this is the story of Andre-Louis Moreau's life in The French Revolution. After his friend is killed by a powerful noble, the Marquis de La Tour d'Azyr, Andre-Louis' quest for vengeance leads him to become an orator inciting the people of France to rebel. Along the way, he becomes a renowned actor for his role as Scaramouche — the sly, roguish trickster. This novel was adapted for film twice, but much like Captain Blood and The Sea Hawk, it lost something in the translation. The second movie does, however, feature one of the most epic sword fights ever committed to celluloid.

Tropes used in Scaramouche include:

"I have been detained by an engagement of a pressing nature. I bring you also the excuses of M. de Chabrillane. He, unfortunately, will be permanently absent from this Assembly in future."

...will you do the Fandango?